Why Blogging Sucks and Other Commentaries

I've had some thoughts for blog posts the past few days, but I haven't felt like actually posting anything. I thought about it for a bit and decided that the reason I didn't feel like posting anything was because of the clunky interface that came with my blog hosting. You know, it's a sad state of affairs when technology convinces you that you shouldn't use it. Anyway, after thinking about that I decided that I should try out some third party blogging apps (which my blog hosting account thankfully supports). I haven't had a chance to try any out yet though until now. See, there are some advantages to waking up at 2am and not being able to go back to sleep.

I recently got a new computer, which has greatly increased the opportunities I have to write code. So we are now a three laptop family. Does the fact that we have three laptops in a house with only two people tell you anything about my profession? My new laptop is a Dell M1330. When I was working on my thesis our lab had Dell laptops and at that time I swore I'd never ever buy a Dell computer. They were chucky, slow and didn't have very good build quality. But Dell has come a long ways in the last few years. I'm pretty happy with my new lappy so far. It's a ~4 lb, 13" incher which makes it nice to carry around but still big enough not to negatively impact productivity. I was thinking about getting an HP Mininote for the portability, but I think my M1330 works much better as a coding machine. Plus, since it was a "scratch and dent" (I haven't found any scratches or dents yet) it was actually cheaper than the Mininote. Wins for everybody!

Ok. So now on to the important stuff, games. After getting my new lappy all set up and installing Visual Studio (sadly I currently have to have VS 2008 and VS 2005 installed because I've been playing with XNA and it's only officially supported on 2005. Come on MS, get with the program!) and after taking a little break from Mario TD, it was time to start coding some more. I worked on a couple non-game related projects (shocking, I know), but the other day I decided it was time to start working on a new game. I wanted something a little less intense than Mario TD turned out to be. I've been meaning to start doing more development in Silverlight and/or XNA. But for this project I decided to fall back to my old standby of GDI+. For this project I just wanted something fun to play around with. What I really wanted was something I could work on for this procedural content generation (PCG) contest over attigsource.com but I didn't get working on things fast enough to have anything to submit. (Plus I only found out about the contest after it had already started.) I've always been interested in PCG and have been itching to get some hands on play time. Here's a picture of what I've got so far 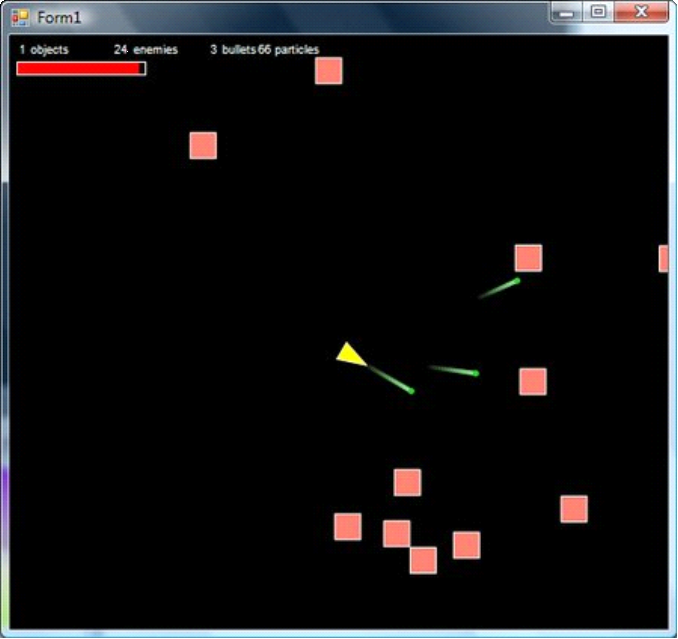 I haven't even renamed the form yet. How embarrassing! But those are some pretty mean looking rectangles, aren't they? And those brave souls aboard the USS Triangle (Simpsons reference) are fighting quite valiantly. Unfortunately, I don't really have much PCG in there yet. I guess technically the graphics are all generated, but the only mildly noteworthy part is the generated particles behind the bullets. The rest is pretty boring stuff. But the framework is coming into place. I want to add in dynamically and randomly generated enemies and weapons and of course cooler graphics. I kind of like the minimalistic thing, but it definitely needs some spicing up. Definitely some nice particle systems. Because, you know, particles are cool. Everybody likes particles.

So hopefully my little game (which doesn't even have a name yet) will turn into something worth playing at some point in the not too distant future. But let's be honest here. It would be hard to be worse than ASCII Space Invaders, right? Hopefully it'll also be a good chance for me to get to play with and learn more about PCG too. Anyway, I'll keep you posted with updates on how it's progressing.

P.S. I find it very ironic that this blogging software doesn't include the word "blogging" in its spell check dictionary.