So I've been working on my next little project a bit. I had actually found acompetition that I wanted to enter it in. It's a Star Trek themed competition. So I worked on that for a while. I even got a nifty little Enterprise (the bad guys are still rectangles. I haven't gotten around to making them into Klingons yet). See. Here's a picture to prove it. 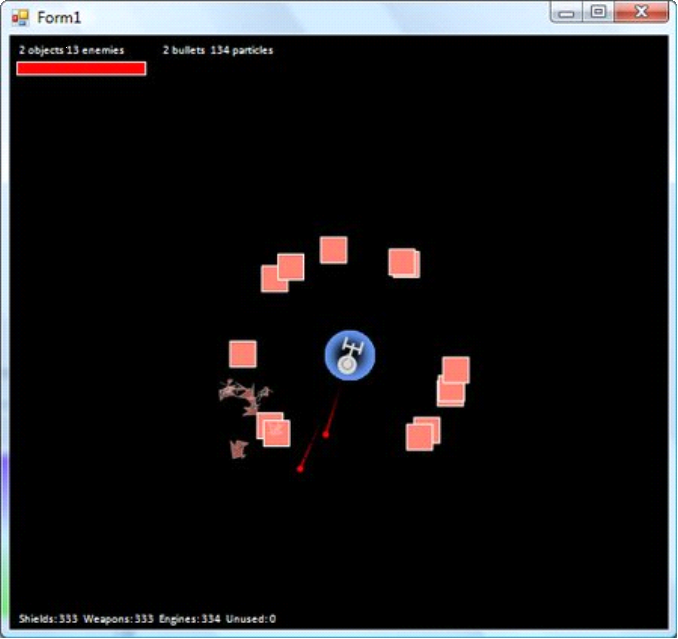 I still haven't renamed the form. How embarrassing!

Anyway, I was working on that, but not feeling terribly inspired by it. Mostly I just wanted to enter something in a competition. But then I found another competition (the forums are down right now. Hopefully they will be back up soon) over at tigsource.com which I felt more inspired about. It's a Bootleg Demake Competition. Basically you make an obvious rip off of a game, but for an earlier system than the one the original game was made on. There are a lot of people remaking 3D games into 2D games and a lot of porting from newer systems (Xbox 360, PS2 & PS3, etc.) to older systems (NES, SNES, etc.). I figured this would be a perfect opportunity to return to my ASCII roots. And I might not have another such opportunity again in the near future. Plus, this would give me a chance to make an ASCII game that doesn't need to be turned into a test (that's where most of my other ASCII games came from). The competition ends at the end of August, but I think I should have enough time. That's one good thing about single character ASCII art, it doesn't take too long. Donkey Kong ASCII only took me about a day to get most of it done. Then another half a day or so to fix a few bugs and make a few more levels. I like that about the whole indie game scene. It shows that you don't have to have hundreds of people and years of development and millions (or hundreds of millions) of dollars to make a great game (not that Donkey Kong ASCII is that great, but some other indie games are).

So I have an idea of what I want to do for this competition, but I don't have much to show for it yet. I'll post some screen shots as soon as I have something to show.